In many industrial manufacturing processes, the supply of heat at targeted temperature is required.

But even in matrix systems of fibre reinforced plastics, which basically cross-link even at room temperature, the introduction of heat offers significant advantages:

So it was only logical to develop a method for use in FRP moulds, in which the surfaces are heated using the electrical conductivity of carbon fibres.

The method was first tried on plates and then further tested on moulds for manufacturing of FRP components, but it is also suitable for other applications, in which surfaces need to be heated. 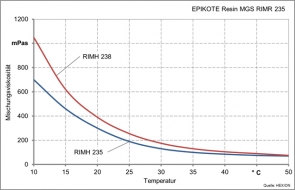 Viscosity curve of a typical infusion resin in relation to temperature (Source: Hexion). 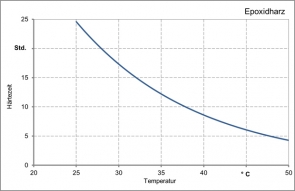 Effect of temperature on the curing time of a typical epoxy resin system.

In the process, the special properties of carbon fibres enable a very efficient conversion of electrical energy, as heat is generated exactly where it is required:

The conversion of electrical energy into heat takes place directly on the surface, so the heat flow paths are extremely short in comparison to other heating processes.

Moreover, the heat capacity of the relatively light fibretemp® moulds is very low, which results in considerable energy savings in cyclical temperature curves.